All great platformers have animated heroes. Even Super Mario, which was released in 1985, used several animations for the player. Why? Because it would look completely unrealistic if Mario just stood frozen in one animation while he runs and jumps around the level. So it makes sense that we should add animations to our player. This will add yet another step of realism to the game.

My art could definitely be improved, but I’ll demonstrate how to create these 3 animations for simplicity’s sake.

The most important aspect of giving any game element multiple animation states, is to make sure you structure it correctly. When I first started programming, I tried to put all of the animations on a single timeline, and the resulting structure was too cluttered and complicated that it was difficult to make things work the way I wanted them to. So now I’m sharing with you a simpler method.

Essentially, we are editing the player and creating a single frame (inside his timeline) for each animation state. To switch to that animation, all we need to do is gotoAndStop(“that_frame_name”)

Each frame will contain another movie clip nested inside it, instead of just plain graphics, which will contain a looping animation.

If this sounds confusing, don’t worry. It’s easier to understand by doing it, especially with the ridiculous number of images I’m providing to walk you through.

Alright, let’s do it! First thing you want to do is double-click on your player to edit him. Select everything inside this symbol, and then convert this into a new symbol. I named it “Player Animation Idle“. This will let us nest the animation inside the player that will play when the user isn’t doing anything.

Next, insert a new Keyframe into the timeline of the Player. This Keyframe will contain the animation for when the player is running.

This will create a frame with the exact same contents as frame 1. This won’t work for us, because we have the Player Animation Idle on frame 1, but we need a new movie clip (Player Animation Running) to be on frame 2. There is a pretty quick way to fix this. On frame 2, click on the movie clip. The Properties panel should look like this:

Ignore the instance name. Look at the button labeled: Swap…

If you click on this button, it easily allows you to swap a different symbol into the same location of the selected Movie Clip. We haven’t created the Player Animation Running symbol yet, but there is a solution to that too. In the menu that pops up (pictured below), click the tiny square button below the picture. This is the Duplicate Symbol button. Enter a new name for the new symbol: “Player Animation Running“. Click OK to create this duplicate, and then click OK once more to swap it.

If you check the properties panel, Frame 2 will now contain an instance of Player Animation Running.

The next step is to do the exact same thing for Player Animation Jumping. Insert a 3rd frame. 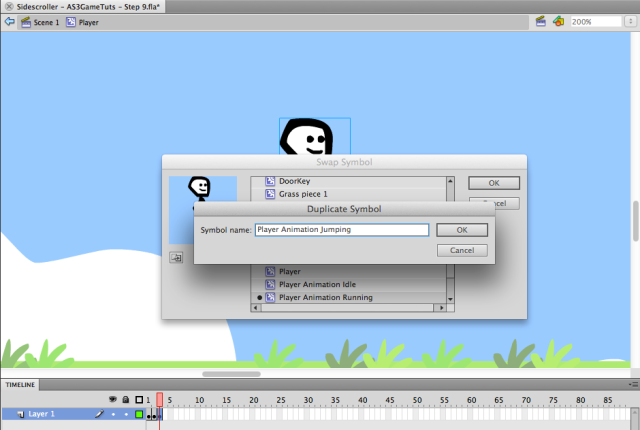 Great! We now have three separate movie clips which we can use to contain the animations! But before we can start animating, there is one small thing left to do, to help with the coding: Frame Labels.

Frame Labels are pretty cool. They let you give your frames specific names. You can use these names to switch to a frame, without even knowing what number it is — this helps make things easier to code. For example, our 2nd frame has the Player Animation Jumping symbol on it. Wouldn’t it be more convenient in our code if we didn’t need to remember exactly which frame this was on? (It isn’t too big of a deal for us because we only have 3 animation states, but if your player had 15 different animations it would be tricky to keep track of things.)

If we give Frame 2 the label “jumping“, then we can switch to it using the code: player.gotoAndStop(“jumping”).

Adding labels isn’t difficult. Create a new layer in the player timeline, which you can name “labels”. Then click on Frame 1 of this layer. This will allow you to edit the Frame’s properties inside the Properties panel.

Frame 1 contains the idle animation, so type “idle” into the Name field of the Label section.

Now do that with the other two frames. Click on Frame 2, and name it “running”.

Go back to Frame 1, and double-click on the Player Animation Idle on the stage to edit it. Your screen should look like this:

A bunch of blue frames will pop up on your timeline. This will automatically create transitions between any specific frames that you edit (move it’s position, scale it up or down, rotate it, etc). If you’ve never used Tweens before, and are looking for more information than I provide, there are many popular guides online to help you, such as: http://tv.adobe.com/watch/learn-flash-professional-cs4/getting-started-13-creating-motion-tweens/ or http://www.adobe.com/devnet/flash/learning_guide/animation/part06.html

You are free to do whatever you want, but here’s what I did:

You can use the same method to create animations for running and jumping. Just make sure you edit the correct symbol.

Go back to the main Player symbol, and this time go to frame 2. Double click on the Player Animation Running object to edit it. I decided to just make my player’s arms go back and forth as he runs. I didn’t even bother with animating the legs, because it can be pretty tricky to make that look realistic if you don’t know how to do it.

I started by selecting the arms on either side of the body, and dragging them off to the sides. We’re going to use another Motion Tween on these individually, so they each need to be their own symbol. It looks messy right now, but I’m going to clean up the art afterwards.

You can use the brush, the eraser, or select tool to edit and reshape the arms into something nicer. Then select each of them individually and convert hem to Movie Clips. The name doesn’t really matter — we aren’t coding with them, just using them to Tween.

If you right-click on them one at a time, you can create a motion tween. Add extra frames to the layer which the body remains on, so that each layer has the same number of frames. Then use the your skills with the transform tool to move and rotate the arms in a semi-realistic running motion. 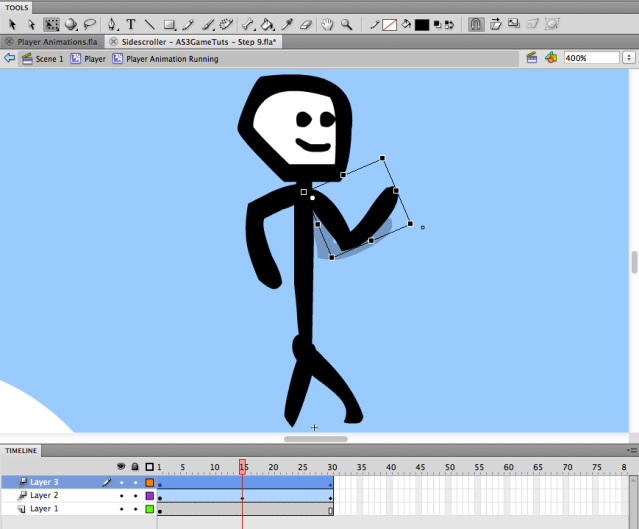 (You can see in the above image that the animation covers 30 frames. Our project is running at 30 frames per second, so this is a 1 second animation. If you want to speed things up, just remove frames from the end of the animation, and adjust your art accordingly.)

I decided not even to use an animation for the jump — I used a single still-image to represent the jump. In a professional game, this probably wouldn’t be good enough, but this is just a test character, so it doesn’t matter. Go to Frame 3 of the Player, and edit the Player Animation Jumping symbol. I just selected the bottom half of his body, and dragged it up a little bit to shorten him.

The art is done!

Once again, now that the art is done we can move on to integrating it with the code. Let’s outline what we want to accomplish:

To start out, let’s declare a new variable at the top of the program: the animationState. This is a String type variable, which means it holds words, not numbers. Set its initial value to be “idle”.

This variable will let us update the player’s animation automatically just by using the line of code, gotoAndStop(animationState);

We want to continuously check if the animationState has changed, so its only natural that we should add some code to the main loop function. We can figure out which animation is currently playing by accessing the currentLabel property of the player. This will give us the name which we set as the label earlier in the tutorial. So if the player is currently stopped on Frame 1, tracing player.currentLabel will output: “idle”.

If the player’s currentLabel matches up with our variable, the animationState, we’ll know that the correct animation is playing. But if they don’t equal one another, we need to gotoAndStop(animationState). Add the following lines of actionscript 3 into the very bottom of the main loop function:

Cool! The only thing left is to set the animationState to the correct name at the correct time. To do so, create a new conditional right above the last lines of  code we added.

It’s logic time! When do we want to play the “running” animation?

Starting with a mental outline of the task:

Translating this into a sentence, we get:

This is a pretty good mental exercise for breaking down complex tasks into simpler ones. If you ever get stuck trying to figure out logic in your game, try to run through these steps.

That’s all set for the running animation. If you test your game and start to move, the player should start looping through that animation. But we haven’t set any other animations yet, so he’ll never stop. We can fix this by adding an else if statement to the end of the conditional. The rest of the conditional is simple. If the player isn’t running, then he will be “idle” if he is touching the ground. Otherwise he must be “jumping”.

Test it out! Everything should work!

You can grab the source file here: Source File!
Once again, thanks for following my tutorials and supporting the site! Any way you can spread the word is greatly appreciated. And as always, if you’ve got questions, just leave me a comment :-)
I hope this was helpful! What would you like to learn next?